This is a selection of favourite dive sites commonly visited by the club. We are constantly exploring the reefs around the NSW Central Coast and uncovering new sites.

Terrigal Haven (15m) - A popular shore dive and nursery for fish and other marine life.

Skillion Cave (20m) - One of the best shore dives in NSW. You jump off the rock platform and soon find yourself in deep water, surrounded by all the marine life you would expect on a boat dive. The cave itself is home for schooling fish and hosts an enormous colony of Jewel Anemones.

Boat Trailer Reef (24m) - Only 500m off the rock platform at Terrigal Haven, this boat dive features a discarded Boat Trailer with the wreck of the SS Yambacoomba not far away.

First Point (26m) - One of the best dives on the Central Coast that can only be accessed in low swell. It features a nice reef wall, swim throughs and great marine life.

The Valiant (27m) - Tug boat accidentally sunk off Barrenjoey Head whilst undertow out to sea for scuttling in 1981.

Two Poles (18m) - A pretty little reef wall, just off the South of Forresters beach and one of the most reliable spots on the coast to see dense growth of Georgonian fans.

Forresters Reef (29m) - A close run from Terrigal, this is quite an extensive reef system with plenty of marine life to see.

Anniversary Reef Wall (18m) - A great reef wall on Anniversary reef (the site discovered/dived by Terrigal Dive on the morning of their 40th anniversary of business).

Sweep City (24m) - A good reef with plenty of fish life as the name suggests.

The Pinnacle (24m) - One of the most popular dives out of Terrigal. The Pinnacle is a lump of reef that can be easily circumnavigated in a dive. There is always plenty to see at this site.

Foggy Fish (29-32m) - A great spot on foggy reef much shallower than sites on the Eastern side of the reef. A fantastic dive.

Foggy Cave (38m) - Discovered by Les & Fran Graham whilst searching for the wreck of the SS Commonwealth, this is a well none Grey Nurse aggregation site whilst the warm water is around.

Jeffs Reef (22m) - Named after a long serving TUG member Jeff Heathcote, this is a site on the Inner Bommies that has become a total club favourite in recent times.

The Three Sisters (22-30m) - Just south of Norah Head, this site features a mini version of its name sake located in the Blue Mountains, just off the reef edge.

More information on dive sites of the NSW Central Coast can be found on some other local websites. 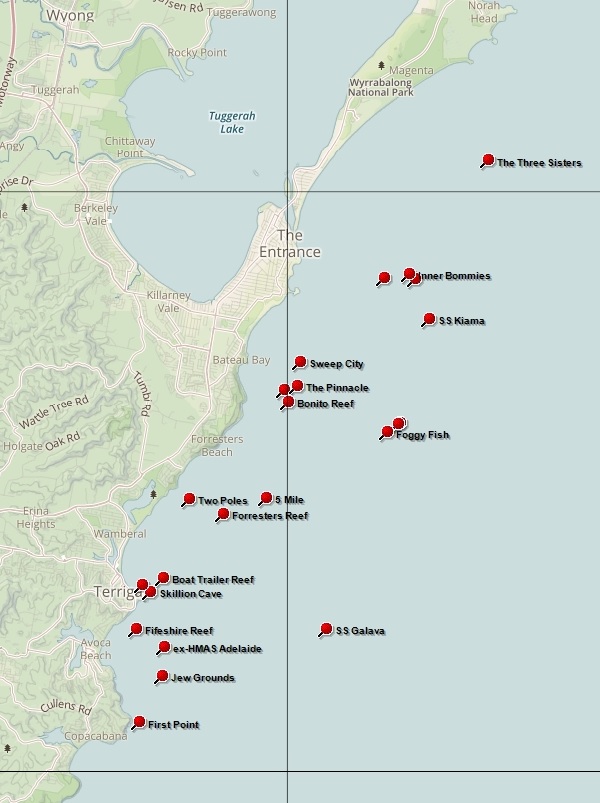